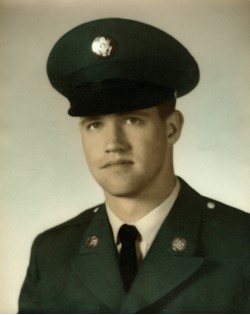 Guestbook 8
Graveside services for Oren "Noble" Brown of Dubois are at 10 a.m. Saturday, Sept. 11, at the Dubois Cemetery with military honors by the Dubois Veterans of Foreign Wars. Mr. Brown died in Casper on Tuesday, Sept. 7, at the age of 67. Oren Noble Brown was born in Alhambra, Calif., on Nov. 8, 1942, the son of Francis O. and Edith (Lavae) Brown. He lived in California, Colorado, and Wyoming and from elementary school age was a resident of Dubois and attended the Dubois schools. He also attended several truck driving schools, one of which was in Denver, Colo. He was a U.S. Army veteran of the Vietnam War. Following military service, he returned to work for his family on the Wagon Box Ranch west of Dubois. He later went to work at the Louisiana-Pacific mill in Dubois. Mr. Brown was of the Christian faith. His family said Mr. Brown enjoyed everything about trains. Survivors include a cousin, Vicky Buholz and her husband Richard of Arizona. He was preceded in death by his parents, Edith and Bud Brown, and a brother, Ramar Brown. Memorials may be made to the VFW in Dubois. On-line obituaries are available and condolences for the family may be made at: theDavisFuneralHome.com Services are under the direction of the Davis Funeral Home of Riverton.