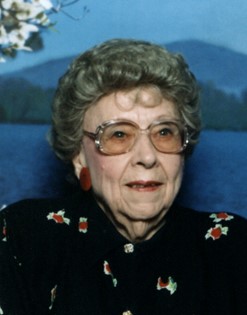 Guestbook 10
Memorial services for Kathryn L. Bailey of Riverton are at 2 p.m. on Thursday, Nov. 11, at the Davis Funeral Home of Riverton, WY. Her daughter, Sharron Bailey, will officiate. Cremation has taken place. Mrs. Bailey died at Riverton Memorial Hospital on Wednesday, Nov. 3, 2010, at the age of 92. Kathryn Lucille Daughters was born in Hamill, S.D., on Oct. 15, 1918, the daughter of Franklin and Hetti Catherine (Adams) Daughters. She was graduated from high school in Winner, S.D. She married Eddie J. Bailey in Winner, S.D., in 1937 and they lived there for a short time before moving to Martin, S.D., where they started a creamery station and route. Mrs. Bailey kept the business running after Mr. Bailey was drafted into military service. Following Mr. Bailey's discharge from the military, they owned a John Deere dealership where Mrs. Bailey worked as a full partner. She was also accountant and office manager for Martin Livestock Sale Barn. The family moved from Martin to Rapid City, S.D., in 1963 and she went to work for Rapid City Livestock for two years and then moved to Mitchell, S.D. After that, she managed the office for the Mitchell Livestock Sale for six years. Later, she opened a small business, Kathryn’s Wig and Beauty Supply, in Mitchell from 1970-1977. She moved to Riverton in 1977 and went to work at Wyoming Office Supply for a number of years. After that, Mrs. Bailey sold Avon products for 25 years. While living in Martin, S.D., Mrs. Bailey served as a Girl Scout leader, manager of a women's softball team, 4H leader, member of the Order of the Eastern Star, and worked as County Treasurer in 1966-67. Her family said Mrs. Bailey enjoyed watching baseball, especially the Colorado Rockies, gardening, baking, sewing, bird-watching, and traveling. She was a member of the Homemaker's Club. Survivors include her daughter, Sharron Bailey of Austin, Texas; a son, Kent Edward Bailey and his wife Debra of Kinnear; 11 grandchildren and three great grandchildren; sisters-in-law, Nellie Griffith of Kelso, Wash., and Jennie Lubbers of Firestone, Colo.; numerous nieces and nephews. She was preceded in death by her husband, five brothers, and one sister. On-line obituaries are available and condolences for the family may be made at: thedavisfuneralhome.com Arrangements are under the direction of the Davis Funeral Home of Riverton.