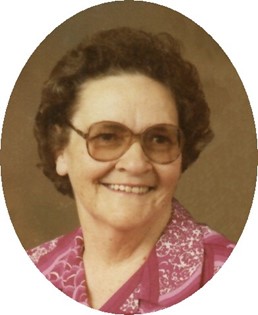 Guestbook 1
Hilda Groathouse of Riverton died at the Help for Health Hospice Home in Riverton on Saturday, Nov. 27, 2010, at the age of 86.

Funeral services are at the Trinity Lutheran Church of Riverton at 10 a.m. on Friday, Dec. 3, with Pastor Dave Magruder officiating. Interment will follow at Mountain View Cemetery in Riverton.

There will be a viewing from 5 to 8 p.m. on Thursday, Dec. 2, at the Davis Funeral Home of Riverton.

Hilda Haun was born in Riverton on Sept. 11, 1924, the daughter of Jacob Haun, Sr., and Mary Elizabeth (Rein) Haun. Growing up, she worked on the family farm on North 8th West out of Riverton. She attended the Riverton schools.

Mrs. Groathouse was a homemaker, mother, and wife, having married Vernon O. Groathouse on Nov. 10, 1946, at the Trinity Lutheran Church in Riverton when the church was newly constructed consisting of a basement only. The couple had just celebrated their 64th wedding anniversary this November.

She was a member of the Lutheran faith, Missouri Synod, and of the Trinity Lutheran Church.

She had lived in Riverton, Pavillion, Lander, and Laramie. After retirement, the couple moved back to Pavillion in 1985 and to Riverton in 2005.

Her family said Mrs. Groathouse enjoyed cooking, visiting, baking for and being with family and friends.

She was preceded in death by her mother, father, four brothers, three sisters, and an infant sister at birth.

Memorials may be made to the Help for Health Hospice Home or Homestead Assisted Living, in care of the Davis Funeral Home, 2203 West Main Street, Riverton, WY 82501.