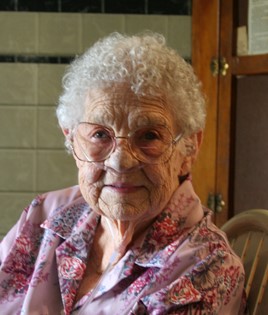 Guestbook 6
Long-time school food service manager Ferne A. Watson of Kinnear died Sunday, July 29, 2007, at Riverton Memorial Hospital. She was 92 years old. Funeral services will be at 11 a.m. Saturday, Aug. 4, at the Davis Funeral Home of Riverton. The Rev. Sally Bub of Holy Nativity Church will officiate. Interment will follow at Mountain View Cemetery in Riverton. There will be a viewing from 5 to 8 p.m. Friday, Aug. 3, at the Davis Funeral Home of Riverton. Ferne Agnes McGraugh was born in Casper on June 20, 1915, the daughter of Mary Ann (Falkenburg) McGraugh and Edward Lawrence McGraugh, II, early pioneers in the Bates Hole area. She was educated at the small country school at Red Creek, then attended and was graduated from Natrona County High School in Casper in 1934. She married William McDuffy Watson on June 1, 1942, in Douglas. They ranched with her father in the Bates Hole area before moving to Kinnear in December of 1948. They continued as sheep ranchers. Mrs. Watson worked at Gardner's Market west of Kinnear for five years, beginning in August of 1949. She then went to work for the Morton/Wind River school in 1954 as cook and retired from there 34 years later as food service manager/head cook. Her dear friend, Rosie Baker, worked side by side with her there for 28 years. Former students remember that her homemade style lunch program was widely known and they say, was probably the last of its kind for many, many years. Her family said Mrs. Watson had many close friends, young and old, but was especially fond of young people and children. They said she was always ready with the praise and encouragement needed to help young people achieve their dreams. And, they said she was always there and ready to support her nieces, nephews, and grandchildren in rodeo, sports, and school events. She was able to live at home until the time of her death with the help of some of the many friends and neighbors in the area. Mrs. Watson was a member of the Episcopal faith and the Holy Nativity Church. She belonged to the Kinnear Grange and Rebekah Lodge. Survivors include sons, Bill Gene Watson of Wilson, Robert B. Watson of El Cajon, Calif., Julian Armour of San Jose, Calif., William Armour and wife Rickena of Ethete, and Preston Armour of San Francisco, Calif.; daughters, Rosanne Longhorn and husband Nathan of Olathe, Kan., and Mary McAdams of San Jose, Calif.;15 grandchildren, nine great grandchildren; sisters, Irma Jean Johnson and husband Jack of Bates Hole, and Lucille Kelsey and husband Albert of Riverton; brother-in-law, John McGraw of Casper; sister-in-law, Jeanie McGraugh. She was preceded in death by her husband, Bill Watson; daughter, Winifred Rupe; brother, Bud McGraugh; sister, LaVerna McGraw; parents; grandparents, Edward and Margaret McGraugh and Anna and George Falkenburg. Memorials may be made to Holy Nativity Church of Morton in care of the Davis Funeral Home, 2203 West Main, Riverton, WY 82501. On-line obituaries are available and condolences for the family may be made at: thedavisfuneralhome.com Services are under the direction of the Davis Funeral Home of Riverton.