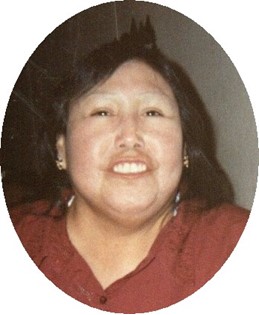 Guestbook 4
Delores Ann Moss was born October 9, 1958 to Herman J. Moss, Sr. and Eileen Antelope at Riverton Hospital. She attended Arapahoe Elementary School, graduated from Riverton High School in 1976, and attended CWC. She was employed by the Northern Arapaho Nation Department of Social Services as IIM/GA administrator for over 10 years.

She passed away at Wyoming Medical Center in Casper, Wyoming from a sudden illness on Saturday, December 11, 2010. Funeral arrangements will be by Davis Funeral Home, with a rosary on Wednesday, December 15 beginning 7:30pm at St. Stephens with a wake to follow at 1115 17 Mile Road, Maxine Moss’ residence. Funeral services will be at 10:00am at St. Stephens Church with burial at St. Stephens Catholic Cemetery. Following the burial, a feast will be held at Great Plains Hall, Arapahoe.

Delores enjoyed beading, spending time with her grandkids and relatives, attending ceremonies, and going to the casino. She was a Gold Star Sister for her brother, PFC Weldon Dale Moss, who was killed in action during the Vietnam War on April 2, 1966.