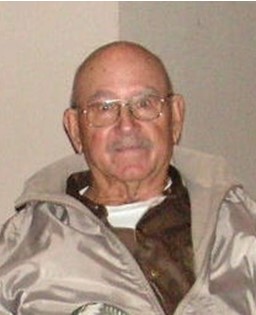 Guestbook 1
Elmer Wayne Wallage was born on April 17, 1925 in Scottsbluff Nebraska and passed away in his Shoshoni home on December 17, 2010. To his friends he was simply known as “Wally”. Wayne was born as one of eight children to a stay at home mother Agnes Margueret Wallage (Prickett) and working father Jarvis Wayne Wallage. Wayne lived in Scottsbluff Nebraska for a short period of his life before moving to Lingle, Wyoming and then ventured out on his own to the Riverton and Shoshoni areas while his parents left for California. Wayne attended Shoshoni High School and on September 27, 1943 placed his country before his own life priorities by enlisting with the United States Navy. He was honorably discharged as a Seaman First Class in 1946, earning the American Area Campaign Medal and World War II Victory Medal. Wayne met Madelyn C. Wallage (Uhrick) and they married in 1971 in Reno NV and later returned to live in Shoshoni raising their three sons. Wally was employed on two occasions at the Shoshoni Garage, working for Curt Kaiser and later for John and Jane Adamson as mechanic and wrecker operator. Wally became employed by the Svilar family as a bartender in the once famous Derby Bar in Shoshoni. Wally was known as one of the best bartenders in the state and was known for the clean white collar look while he served up the best. While living in Shoshoni he owned and operated what used to be Wally’s Standard station where he distributed gasoline and was a full time mechanic. Wally moved on from bartending and the station to work for the then Burlington Northern Railroad for a few years where he shuttled train crews from Bonneville Wyoming to Casper and Greybull Wyoming. His position was eliminated and Wally refused to move his family from the area he so loved and he elected to take a position in the maintenance of the Fremont County buildings in Riverton and Lander by which he retired in 1994. Wally persevered part of his life, living with injuries he suffered from a car wreck in which he was left for dead as a passenger and found to be alive the next day. You may have watched Wally struggle with the debilitation, but if you knew him, you would know that he never complained, despite being in pain. In his off time, Wally enjoyed hunting big game, fishing, fixing things, dabbling on the CB under the handle “Wallygator” and spending time with his family and friends. Due to his service with the United States Navy Wayne did not immediately return to complete his high school education. However in 2002 he was one of many veterans honored by finally receiving his high school diploma in the Shoshoni High School Class of 2002 at the age of 77. He received recognition from Vice President Cheney, Senator Mike Enzi and Governor Jim Geringer. Wayne is survived by two sons: Jarvis Wallage, Wife Natalie and Granddaughter Peyton of Chadron, Nebraska. Douglas Wallage, Wife Kristin and Granddaughter to be Gracelyn of Shoshoni Wyoming. Brothers: Don and Delmer Wallage of California, Sisters: Edna Davis of Gillette Wyoming and Ellen Byers of California and numerous nieces and nephews. He is preceded in death by his parents, Son William Patrick Wallage, Sister Virginia Wallage, Brothers George and Milo Wallage. He left behind his only two surviving classmates and lifelong friends of the class of 1944 Gayle Currah and Robert Dornblaser. A memorial celebration service with military honors is scheduled for 10:00 am on Monday December 27, 2010 at the First Baptist Church in Shoshoni to be officiated by Reverend Dale Gibson with an open invite for lunch to follow. Memorials may be made to the Shoshoni Volunteer Fire Department or Shoshoni Senior Center.