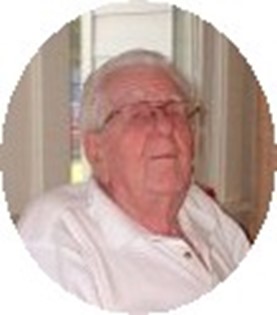 Paul Goedicke was born on September 7, 1914 at the D-Ranch in Fremont County to Ernest Paul and Florence (Walker) Goedicke.

From the D-Ranch, near Holt, WY, the family moved two miles away on Bridger Creek to “Otto’s Place,” where his father continued to be the Postmaster and his Uncle Otto, the mail carrier. Paul spent his early years at Otto’s Place. His mother home schooled him. In 1921, the family moved to Riverton for further schooling. After graduating from Riverton High School in 1932, during the depth of the depression, Paul held many odd jobs. He worked at the Civilian Conservation Camp (C.C.C.) for one year. Paul’s first real job was in 1936, when he became employed with Gilpatrick Construction Company. He worked there first as a dragline operator and then moved into the office as a bookkeeper and then became the office manager. He ended up as the Cost Accountant and Estimator for road contracts throughout Wyoming. He also became part owner of the company, retiring in 1983 after 47 years.

After his retirement, he resided in Riverton and Lake Havasu, Arizona spending six months of the year in each place.

He was an avid hunter and fisherman.

Paul was preceded in death by his parents, twins brothers that died at an early age, and also 2 other brothers, Dr. Victor A. Goedicke and Frederick E. Goedicke and sister, Jeanette Goedicke.