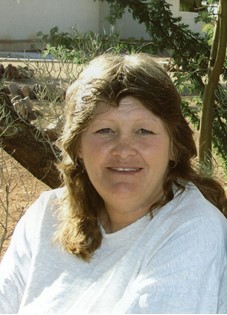 Guestbook 12
Funeral services for Linda D. David of Riverton are at 10 a.m. on Tuesday, Jan. 3, at the Davis Funeral Home of Riverton with the Rev. Mark Thurman officiating. Cremation will follow the service. Mrs. David died at her home in Riverton on Tuesday, Dec. 28, 2010. She was 55. Linda Darlene Jones was born in Riverton on Oct. 1, 1955, the daughter of Earl Jason Jones and Nellie Pearl (Chopping) Jones. She had lived in Riverton most of her life. On May 28, 1991, she married Dan T. David in Lusk. Mrs. Jones worked at the Riverton Crisis Center. Her family said she enjoyed drawing pictures, making greeting cards, spending time with family, friends, and her grandchildren. Survivors include her husband, Dan of Riverton; a son, Joseph Dale Northcott of Riverton; two grandchildren, Ariana and Ryder; her mother, Pearl Jones of Riverton; a brother, Dennis Jones of Riverton; a sister, Shelly Jones of White Wood, S.D.; a cousin, Joey Jones of Riverton; several aunts, uncles, nieces, and nephews. She was preceded in death by her father and grandparents. On-line obituaries are available and condolences for the family may be made at: thedavisfuneralhome.com Services are under the direction of the Davis Funeral Home of Riverton. Endendend123010cbt -- 212 Words