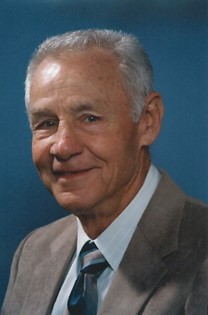 Guestbook 42
Funeral services for Carl L. Andre, 83 of Riverton will be held at 4 p.m., on Wednesday, January 12th, at St. Margaret’s Catholic Church in Riverton. A dinner will follow. Father Andrew Duncan will officiate. A Rosary will be said at the church on Tuesday, January 11th at 7:00 p.m. Visitation will be from 8 a.m. to 3 p.m. on Wednesday the 12th at the Davis Funeral Home in Riverton. Mr. Andre died Friday morning, January 7th at Help for Health Hospice in Riverton, surrounded by his family.

Carl Linn Andre was born on November 20th 1927 in Hot Springs, SD, the son of William McKinley and Gertrude Maude (Wright) Andre. He graduated from Hot Springs High School and served in the military during the Korean War. Carl attended the University of Wyoming and the University of South Dakota, playing football and graduating with a degree in Education. On August 7th, 1953 he married Julia Mae Becnel in Custer South Dakota and began his teaching career in Hot Springs. The family moved to Riverton in 1960 where he continued to teach, coach and officiate for over 30 years. He went on to further his education, graduating from McNeese State University in Lake Charles, LA with a Masters in Educational Administration. While spending sometime working as an administrator in the Riverton School District, Mr. Andre preferred the classroom and the kids and returned to finish his career teaching and coaching. After his retirement in 1988 he continued to work in education, supervising student teachers for the University of Wyoming and officiating athletic events across the state.

Carl loved his children and grandchildren, instilling in them his love for all things outdoors; teaching them to hunt and fish. He spent as much time as possible fly fishing on the Sweetwater and hunting the fields of Wyoming. He thrived on athletic competition of all sorts, but maintained a particular passion for the sport of track and field and could be found most weekends in the spring starting a track meet somewhere in the state.

He was preceeded in death by his parents William and Gertrude Andre, brother, Walter Andre and Sister Eleanor (Andre) Lee.

Memorials may be made to the Help for Health Hospice Home or St. Margaret’s Catholic School in care of the Davis Funeral Home, 2203 West Main Street, Riverton, Wyoming 82501.

On line obituaries are available and condolences for the family may be made at: thedavisfuneralhome.com Services are under the direction of the Davis Funeral Home of Riverton.