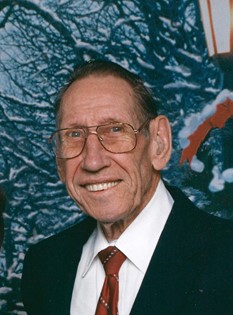 Funeral services are at 2 p.m. on Saturday, Jan. 15, at the First Baptist Church of Riverton. Rev. Rex Whitman officiates. Interment follows at Mountain View Cemetery in Riverton with military honors.

There is a viewing from 5 to 7 p.m. on Friday at the Davis Funeral Home of Riverton and for one hour prior to the service at the church on Saturday.

Vernon Orvile Arndt was born in Bertha, Minn., on June 16, 1923, the son of Carl A. Arndt and Lena Veronika Dorothea Johnson. He grew up and attended school in Parkers Prairie, Minn.

He grew up in the Lutheran faith and was a member of the First Baptist Church of Riverton.

Mr. Arndt was a retired sawmill worker, having worked as an edgeman in the lumber industry for 36 years. His first work experience was farming in Minnesota. After his military service he worked at a beanery in Morrill, Neb, then in sawmills in West Point and Jackson, Calif.

The family made their home in West Point, Calif., for 40 years, then moved to Riverton in June of 1985 upon retirement.

Mr. Arndt was a member of the Wind River VFW Post 3628 in Riverton and the 1838 Rendezvous Association.

His family said he enjoyed camping, fishing, hunting, woodworking, gardening, and flowers. He built two hours in California and helped build other homes there. He operated Arndt's Woodshop in Riverton, building many projects with his family.

Survivors include his wife, Rosalie Arndt of Riverton; two sons, James Arndt and his wife Sue of Riverton and their sons, James, Tony, and Rick, and Charles Arndt and his wife Kathy of California, and their children Mike and Melissa; a daughter, Pam Shamp and her husband Larry of Minneapolis, Minn., and their children, Tersa, Cristy, and Joey; the eight grandchildren and nine great grandchildren; brothers, Ivan Arndt, Pat Johnson, Mike Johnson, and Wattson Johnson, all of Minnesota; a sister, Donna May Hoytha of Minneapolis, Minn.

Memorials may be made to the Veterans of Foreign Wars Post 3628 of Riverton, in care of the Davis Funeral Home, 2203 West Main Street, Riverton WY 82501.