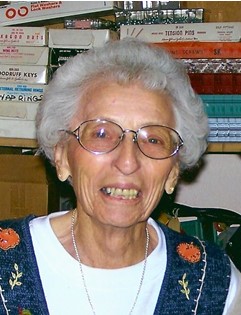 Guestbook 7
Mavis (Ramage) Braddock of Lysite died on Tuesday, Jan. 25, 2011, at Riverton Memorial Hospital. She was 76.

Cremation has taken place and, at her request, there will be no services. A celebration of her life will be set at a later date.

Mavis Ramage was born on March 27, 1934, at the family ranch on Lysite Creek, the daughter of Wanda (Barclay) Ramage and William Ramage. She attended elementary school in Lysite and was graduated from Natrona County High School in Casper with the Class of 1952.

After she attended Casper College, she returned to the family ranch where she lived the rest of her life. Her family said she learned to appreciate nature's beauty, care for the animals and love the outdoors at an early age, accompanying her parents on the routine ranch duties.

Upon the death of her father, she and her husband Bill operated the Ramage Ranch Company, wintering sheep on Lysite Creek and summering in the Big Horn Mountains. The family said she was skilled in all aspects of sheep operation, including range lambing, shed lambing, trailing, docking, pulling sheep camps, dealing with a variety of sheepherders, and border collies. They said she continued to enjoy livestock and animals, especially dogs. She was involved and kept in contact with ranch operations until her death.

In December of 1959, she married Ralph Braddock and they made their home on the family ranch.

In 1958, she and her brother acquired the Lysite Store where she split her time working at the store and at the ranch.

Mrs. Braddock did the bookkeeping for both the ranch and the general store. In her later years, she converted her bookkeeping process over to computer. With her computer, the family said she enjoyed connections she had with long distance friends and vast information available on subjects such as the stars, geology, birds, and flowers.

In the late 90s, Mr. and Mrs. Braddock sold the sheep and semi-retired, but continued to operate the store in Lysite until 2008.

Memorials may be made to the Paws for Life Animal Shelter in care of the Davis Funeral Home, 2203 West Main Street, Riverton, WY 82501.