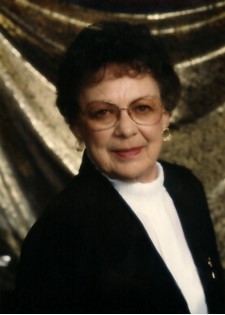 Guestbook 6
Jean Moore of Riverton died Sunday afternoon, Feb. 27, 2011, at the Help for Health Hospice Home in Riverton. She was 84.

Jean Devish was born in Mason City, Neb., on Oct. 10, 1926, the daughter of Fred and Esther (Davis) Devish. She moved with her parents to a Homestead in the Burma Road area of rural Riverton, and later moved to Hidden Valley.

Mrs. Moore worked as bookkeeper for the family business, Moore's Monument Co. from the time they established it in 1971 until retirement in 1991. Prior to that, Mrs. Moore worked for Tim Pickett Service Supply Co., for 17 years.

Mrs. Moore was a member of the United Methodist Church of Riverton.

She was a charter member of the local chapter of the National Secretaries Association and belonged to the VFW Auxiliary.

Her family said she enjoyed fishing, camping, and spending time with her family, especially her grandchildren and great grandchildren.

She was preceded in death by her first husband, Dick Sloan on May 9, 1966; her second husband Allen Moore on July 11, 2010; a sister Dorine Dewey and her husband George; twin brothers, Melvin and Marvin Devish, and a Niece, Barbara Davison.

Memorials may be made to the Help for Health Hospice Home or the Riverton Animal Shelter, in care of the Davis Funeral Home, 2203 West Main Street, Riverton, WY 82501.