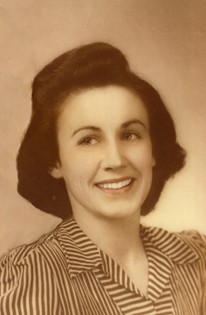 Guestbook 1
Memorial services for Elsie L. Schweigert of Riverton will be at 10 a.m. Saturday, Aug. 11, at the Davis Funeral Home of Riverton. A brunch will follow the service at the Riverton Country Club at 11:00 a.m. Cremation has taken place. Mrs. Schweigert died Tuesday, Aug. 7, 1007, at Wind River Heathcare in Riverton. She was 85 years old. Elsie Laura Robertson was born on April 25, 1922, in Stuart, Neb., the daughter of George and Eva (Minor) Robertson. She spent her childhood in the Stuart area of Nebraska. After being graduated from high school with a teaching certificate, she taught for several years in a one-room rural school, teaching all elementary grades. She married Harold Keith Schweigert on July 26, 1944, in Yuma, Ariz. Their three children were born in South Dakota. For nearly 40 years, the couple lived in the Kinnear area of Fremont County. She was a member of the Methodist faith. Mrs. Schweigert was a teachers' aide at Jefferson Elementary in Riverton and worked for DePass for several years. Mrs. Schweigert was a homemaker. She also served as an election judge. Her family said Mrs. Schweigert was an accomplished seamstress and an ardent spectator and supporter at her children's sports events and activities. She continued supporting her grandchildren's activities for many years. She was a member of the Order of the Eastern Star and Chapter AP, P.E.O. Survivors include sons, Duane K. Schweigert and wife Pam of Kinnear and Bradley D. Schweigert and wife Lety of Harlingen, Texas; daughter, Marlene E. Brodrick of Riverton; three grandchildren, Cory Anderson and wife Amy, J.T. Brodrick, and Laura Schweigert, and one great grandchild, Bryn Anderson; a brother, Jack Robertson, and three sisters, Ella Marcellus, Bernadean McCoy and Zada Norman. She was preceded in death by her husband, H. Keith Schweigert on March 3, 2007; her parents; a brother, Kenneth Robertson; three sisters, Kathleen Delosh, Cora Pettijohn, and Mildred Tams, and great grandson, Zane Anderson; son-in-law, Gary Brodrick. Memorials may be made to Mrs. Schweigert's family, in care of the Davis Funeral Home, 2203 West Main, Riverton WY 82501. On-line obituaries are available and condolences for the family may be made at: thedavisfuneralhome.com Services are under the direction of the Davis Funeral Home of Riverton.