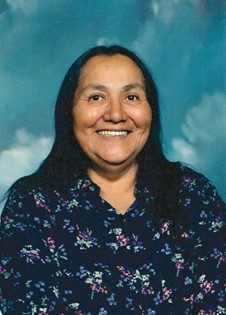 Myrtle Roselle White Antelope was born at Fort Washakie on Aug. 6, 1939, the daughter of Robert M. and Odetta (Brown) White Antelope. She was a life-long resident of the Arapahoe community, being raised by her grandmother, Lena Brown. She, attended the Arapahoe School and St. Michaels Mission and earned her g.e.d. and attended Central Wyoming College.

Mrs. Oldman was a member of the Arapahoe Language Culture Commission and her family said she held a strong belief in Native American religious ceremonies.

The family said she enjoyed doing crafts, sewing beadwork, going to pow-wows, visiting friends and relatives, was a great storyteller, was very knowledgeable about her culture, language, and songs, loved to travel, and cooking traditional foods.

She had been an Arapaho language and culture teacher, school board member for St. Stephen's and Wyoming Indian School District, a community health representative, dental hygienist for Indian Health Services, an Arapaho immersion teacher at the Arapahoe School and St. Stephen's School.