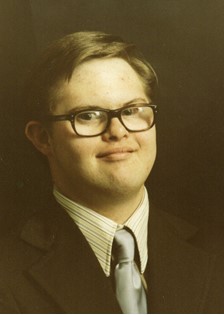 Guestbook 8
Lemual K. "Lem" Smith of Riverton died on Tuesday, Aug. 7, 2007, at the Wyoming State Training School's Health Care Center in Lander. He was 46 years old. Funeral services will be at 10 a.m. Friday, Aug. 10, at the Davis Funeral Home of Riverton. Pastor Mike Bowman will officiate and burial will be at Mountain View Cemetery in Riverton. There will be a viewing from 5 to 7 p.m. Thursday, Aug. 9, at the Davis Funeral Home, 2203 West Main in Riverton. Lemual Kevin Smith was born in Huntington, Ind., on Oct. 27, 1960, the son of Virgil A. Smith and Veda M. (Albertson) Smith. He grew up and attended schools in Huntington. He has moved to Riverton from Huntington nine years ago. In Huntington, he worked for Pathfinder Services and, after coming to Riverton, he worked in recycling for Community Entry Services. He was described by his friends as "an exceptional person who knew no strangers." Making friends easily, Mr. Smith enjoyed his four-wheeler, playing miniature golf, dancing, music, and traveling throughout the U.S. to Alaska and into Canada and Mexico. He also enjoyed horses and attended horse camp in Fort Wayne, Ind., every summer. Survivors include his parents Virgil and Veda Smith of Riverton; brothers, David A. Smith and his wife Cheryl (Uecker) of Riverton, and Steven D. Smith and his wife Carolyn (Bow) of Riverton; nieces and nephews, Deona Hensley of Missouri, Darrell Hensley of Riverton, Debra Downing of Indiana, Carey Lopez of Riverton, Sheldon Smith and Somer Smith, both of LaGrange, Ind.; three great nieces and nephews. He was preceded in death by his maternal and paternal grandparents. Memorials may be made to the Wyoming State Training School in Lander, in care of the Davis Funeral Home, 2203 West Main, Riverton WY 82501. On-line obituaries are available and condolences for the family may be made at: thedavisfuneralhome.com Services are under the direction of the Davis Funeral Home of Riverton.