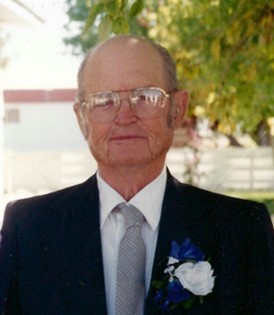 April 1, 2011 God called home one of the finest men born. But God granted him a long life to spend with a large, loving family.

Roger L. Meineke was, no doubt, lovingly received into the arms of his wife, Irene, who preceded him in death by a mere 3 months.

Dad married Mom, Irene Winterowd, on September 19, 1946. Those he left behind will never forget this wonderful brother with 13 siblings, (those that preceded him in death were brothers Clair, Harlen, Melvin, Leonard, Robert; sisters, Nina, Dorothy, Berneice, Naomi, Imogene, and Beverly). He was father of six, grand-father of 12, great-grand father of 18, and soon to be great-great grandfather of 3. His brother-in-law, Irvin Winterowd has lost a great mentor of love and logic. Roger was born November 24, 1919 in Sedgwick, Colorado to Herman and Hazel (Woodruff) Meineke.

He left high school to work on the railroad and returned to school and graduated at the age of 20. He joined the army air force after the bombing of Pearl Harbor. He was an engineer on B-24 bombers and flew missions over the Aleutian Islands and German strongholds in Europe. During this time he achieved the rank of Master Sergeant, served as Crew Master and received other numerous medals, including the Silver Cross from the Russian Army. When he returned home, he continued to work as a mechanic and machinist.

Back home in Colorado he lived in various towns including Padroni, Sterling and Commerce City. He moved with his wife, Irene, to Riverton in 1995. As a true patriot, he was exceptionally proud of his military duty and became Commander of his VFW in Commerce City and also served as Commander in the VFW post in Riverton. He spent many years working at Tempte Trailer in Commerce City and ultimately became UAW union president.

Needless to say, Dad always championed the causes he felt in his heart but he had a lighter side too, and loved to tease and enjoyed the company of his ever growing family. He loved to hunt, fish, and produce beautiful gardens of fruits, vegetables, and flowers. His pride in his military duty sparked many stories of his WWII days and we all listened in awe and with pride to this wonderful man.

He is preceded in death by his parents, his love of 64 years, 5 brothers and 6 sisters and also his grandson Robbie Carey.

The family would like to extend a special thanks and appreciation to Rhonda, Bob and grandson Alex Waite who took such special care of Dad in his last few weeks. They were by his side 24/7 and we extended our love and gratitude to them.

There will be a viewing at Davis Funeral Home from 5-7 PM on Wednesday April 6. Services will take place Thursday April 7th, 2:00 pm at Davis Funeral Home. Pastor Mike Johnson will conduct the service, Roger’s brother-in-law, Irvin Winterowd will eulogize Dad’s life and Judith Winterowd will provide the music in tribute to this remarkable man. In Lieu of flowers donations to Amedisys Hospice would be appreciated by his family.

Rest in peace, Dad. You are forever in our hearts