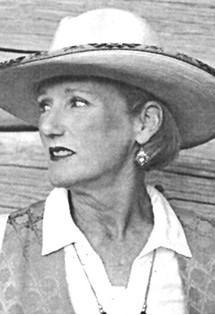 Cremation has taken place. A celebration of life will be held this summer.

Locke Hamilton was born June 16, 1952 in Philadelphia, Pa. to Joseph and Charlton Corson.

Mrs. Hamilton was a world class equestrian trainer and competitor.

She performed with her husband, Les, and Norman Winter as the Prickly Pair and the Cactus Chorale. Musical achievements include winning the Western Music Association’s Marilyn Tuttle Best of the Best 2009 Harmony Award and the 2010 Award for Best Traditional Album by a Duo or Group for their album “Romance With the Range.” Six of the trio’s eight albums charted nationally on Americana Folk Radio and were rated in the top 10 for well over a decade in the Western Music genre.

She also won the Christian Music Association’s Album of the Year award for her mid 90s release “God’s Country.”

Her family said her whole life was music and horses.

She is survived by her husband Leslie Hamilton of Dubois; daughter Tara Golliher of Dubois; her father, Dr. Joseph Corson of Pa.; brother Bill Corson and sister Dr. Ann Corson, both of Pa.; stepson Shad Hamilton and his wife Amanda and their children of Lander; stepdaughter Hope Hamilton of Va.; close friend and band member Norman Winter of Dubois.

She was preceded in death by her mother, Charlton Corson, and brother Ted Corson, both of Pa.