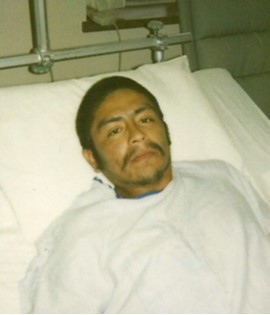 Traditional Native American Church funeral services are at 10:00 a.m on Wednesday, April 20, at the Rocky Mountain Hall at Fort Washakie. Interment follows at the Sacajawea Cemetery in Fort Washakie.

Darrell James Tillman was born in Lander on July 16, 1981, the son of Clarence Bruce and Pearl Ann Tillman. He was a member of the Shoshone Tribe and his Indian name was Windin.

He attended schools in Lander, Fort Washakie and Flandreau Indian School in South Dakota, playing basketball, football, and wrestling while in school. He grew up at Fort Washakie, lived most of his life there, and was named the "Little Brave" at the 1987 Crowheart pow-wow.

He attended the Fort Washakie Baptist Church, the Native American Church and the Church of Jesus Christ of Latter day saints. Mr. Tillman was an artist, specializing in ink drawing.

He worked as a lifeguard at the Chief Washakie Plunge at Fort Washakie, was a security guard for the casino in Flandreau, S.D., groundskeeper for the Arapaho Sundance for three years with Lucy Fox, and worked security for the Shoshone Indian Days.

Mr. Tillman was a sundance runner and participated as a traditional dancer, traveling to many states to dance.

His family said that while he liked to draw everything, clowns were his favorite. They said he liked hanging out with his friends, played stick games, and enjoyed carpentry, making table, speaker boxes, and picture frames.