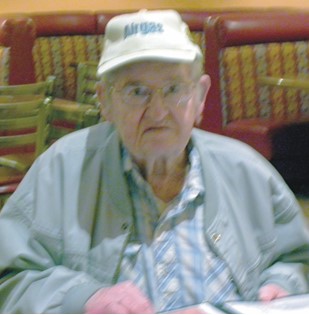 Guestbook 7
Alexander "Alex" Heil of Riverton died Tuesday morning, April 19, 2011, at the Hospice Home in Riverton. He was 89.

Funeral services are at 10:00 a.m. on Friday, April 22, at the Trinity Lutheran Church of Riverton with interment following at Mountain View Cemetery in Riverton.

Alexander Heil was born in Bayard, Neb., on March 13, 1922, the son of John Peter Heil and Anna (Keller) Heil. The family moved from Bayard to Lyman, Neb., and then to Riverton in the 1930s. He was graduated from Riverton High School where he played football and was on the state championship team his senior year.

Mr. Heil was engaged in farming throughout his life. He was top sugar beet grower for several years, raised Angus cattle, sugar beets, and malting barley, and pinto beans.

He was a member of the Beet Growers Association and the Farmers Union.

His family said he enjoyed hunting, fishing, and played softball for several years.

Mr. and Mrs. Heil spent their winters in Arizona for many years.

He was preceded in death by his wife, Pearl on June 3rd, 2008; parents; brothers and sisters, Henry, Alvina, George, Harry, Ann, Robert, and Pete.

Memorials may be made to the Trinity Lutheran Church of Riverton or to the Help for Health Hospice Home, in care of the Davis Funeral Home, 2203 West Main Street, Riverton, WY 82501.