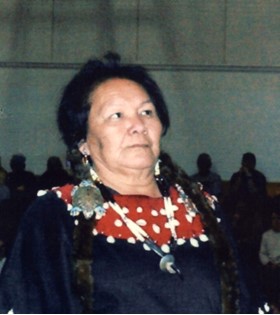 Guestbook 6
Funeral services for Gearldine A. "Deenie" Shakespeare of Arapahoe are at 10 a.m. on Monday, April 25, at St. Stephen's Catholic Church. Interment follows at the Spoonhunter Cemetery on 17 Mile Road.

Rosary is at 7 p.m. on Sunday, April 24 at St. Stephen’s Catholic Church with a wake to follow at Jessica Guffey Residence, 929 17 Mile Road.

Gearldine Angela Spoonhunter was born on Jan. 28, 1934, at Arapahoe, the daughter of James Francis Spoonhunter and Marguerite Agnes (Warren) Spoonhunter. She was a life-long resident of the Wind River Reservation and of 17 Mile Crossing. She attended St. Stephen's School where she played basketball, graduated from Riverton High School, and attended Haskell Indian Jr. College in Lawrence, Kansas.

She was the BEST cook at the Arapaho Ranch for 24 years. Prior to that, she had worked 12 years with Martha Dale at the Thunderbird Motel, and six years at the Pioneer Nursing Home in Thermopolis.

Geraldine was of the Catholic faith and followed traditional beliefs.

Her family said she enjoyed beading, dancing at pow-wows, reading, sitting on her swing sipping coffee, cooking, and riding horses.