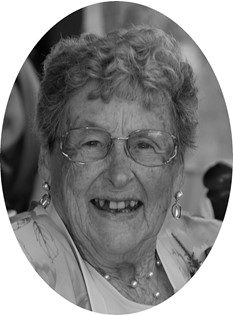 Guestbook 7
Doris L. Johnson of Riverton died at the Help for Health Hospice Home in Riverton on Thursday, April 21, 2011. She was 84.

Funeral services were Tuesday morning, April 26, at 10 a.m. at the United Methodist Church of Riverton with interment following at Mountain View Cemetery in Riverton. A luncheon followed services at the church.

Visitation was Monday evening, April 25, at the Davis Funeral Home of Riverton from 7 to 9 p.m.

Doris Louise Beckman was born in Riverton on April 15, 1927, the daughter of E.W. "Jim" and Melba (Gilliland) Beckman. She was a granddaughter of William Gilliland, who was one of the original homesteaders in Riverton when it was founded in 1906 and she remained as a life-long resident of Riverton. She grew up on the Beckman farm with her sisters, Elizabeth M. "Betty" and Wilma Jean.

The Beckman sisters attended school at the Riverview school house on Riverview Road. After the end of World War II, she assisted with the revival of the Fremont County Fair in 1945 and, within a few months of his return from World War II U.S. Army duty in Germany, she married the man "from up the road," Merle Floyd Johnson, on Nov. 21, 1946, at the Beckman residence.

Mrs. Johnson was also involved with the Riverview Grange and sold Grange insurance. The Riverview Grange eventually merged with the Kinnear Grange and she continued her membership there. In addition to her work with the County Fair, 4-H, and Grange, on Tuesdays she clerked sales at the Riverton Livestock Auction, carrying on a tradition established by her father who was an auctioneer. Mrs. Johnson also assisted as scale operator at Holly sugar beet dumps in the Riverton area.

After her retirement from the fair, Mrs. Johnson worked for Chuck Burgess at Hertz Rent-a-Car. She eventually bought the franchise and operated one of the few Hertz franchises that were independent of corporation or car dealership assistance. She ultimately sold the franchise to Gary Brodrick.

Later Mrs. Johnson became secretary for the United Methodist Church of Riverton, remaining active with the church until as recently as delivery of after-church snacks on Sunday, April 3, 2011.

She was preceded in death by her parents; her husband, Merle Floyd Johnson, and two sons, Paul Douglas Johnson and Gary Levan Johnson.

Memorials in her name may be made to the Arthritis Foundation with a memorial page established at http://www.arthritis.org/donate.

On-line obituaries are available and condolences to the family may be made at: thedavisfuneralhome.com