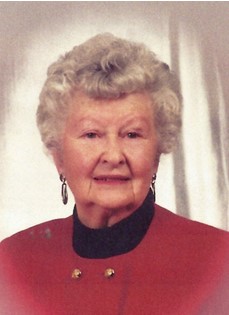 Caroline Wensloff was born on Nov. 14, 1916 in Cromwell, Minn., the first daughter of Oscar Wensloff and Mary (Schroeder) Wensloff, later of Hastings, Michigan.

She moved to Hudson in 1932 to help her aunt and uncle Joe Schroeder in Hudson and attended her senior year and graduated from Fremont County Vocational High School in Lander with the Class of 1932.

She attended the University of Wyoming and received her teaching certificate. She then taught at Red Canyon and Twin Creeks rural schools in a one room classroom with children of varying ages.

She married John J. Lapeyre, Jr., on June 13, 1938, at the Catholic Church in Hudson. Together they operated the Lapeyre Hotel and Johnny's Bar, and The Sky Club for many years.

Mrs. Lapeyre was a charter member of Business and Professional Women's Club, The Ponderosa Club, Junior Women's Club, and the Ladies Golf Association. She was a Girl Scout Leader with the troop associated with the American Legion. She and Mrs. Roy Shaff and Mrs. Rex Peters started the Riverton Duplicate Bridge Club with one to 14 tables for six years. She was a Thermopolis District President of the Catholic Deanery.

She loved being associated with the ladies golf club and won the tournament the second year it was opened. She accumulated several trophies and bowling pins during following years. She enjoyed growing flowers, painting, sewing, bowling, golfing and traveling to Hawaii, Mexico, Bahamas and to Korea where her son-in-law was assigned.

Memorials may be made to the Breast Cancer Society, a favorite school, or to a charity of the donor's choice.