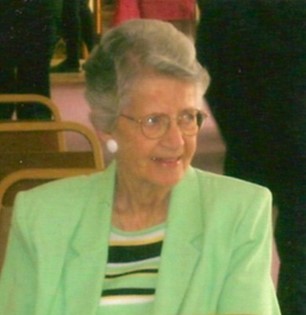 Guestbook 3
Mary Jane Nowlin, 84, passed away in her sleep May 6, 2011, at the Poplar Life Care Center in Casper. She was born March 24, 1927, in Lander and spent all of her early years in Fremont County. Mary Jane lived in Dubois, Crowheart and Lander before graduating from Fremont County Vocational High School, which later became Lander Valley High School, in 1945. She also attended the University of Wyoming for two years. The only daughter of Francis and Ellen (Carmody) Savage, some of Mary Jane’s fondest memories were spending summers at Granier Meadows near Louis Lake, where her parents herded sheep. In April of 1948 Mary Jane married John Nowlin at St. Michaels Mission in Ethete. They lived on a ranch in the Crowheart area where Mary Jane helped out at the local schools while John worked the ranch. John, who was killed in an automobile accident in August of 1963, and Mary Jane had three children – Sandy, Esther and John Jr. Mary Jane lived and worked in Lake Tahoe, Calif., for a couple years before moving back to Lander, where she worked at the Wyoming State Training School. She was an avid reader and enjoyed jigsaw puzzles and watching college sports, primarily UW and Notre Dame football. Mary Jane also made a point of attending as many of her grandkids’ activities as she could. Mary Jane spent the last three years of her life at Life Care’s special care unit. While there she made numerous friends among the residents and nurses, as well as helping with many of the daily activities. Survivors include daughter Sandy (Ken) Hurley of Casper, daughter Esther (Wendell) Richardson of Riverton and son Jack of Casper. She is also survived by five grandchildren – Jason (Cassie) Hurley of Driggs, Idaho; Preston (Megan) Richardson of Laramie; Becca Richardson and Alec Richardson of Riverton; and Madison Nowlin of Lansing, Mich.; and great grandson Hayden Hurley. Mary Jane was preceded in death by her parents and her husband. Services will be held at the Mormon Church in Riverton on Wednesday at 1 p.m. In lieu of flowers, attendees are asked to make memorial contributions to Poplar Life Care Center, 4041 South Poplar in Casper. Funeral arrangements are under the care of Davis Funeral Home in Riverton.