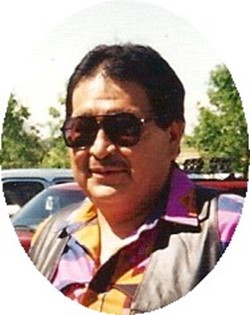 Guestbook 10
Funeral services for Howard Spoonhunter of Arapahoe are at 10 a.m. on Wednesday, May 18, at St. Stephen's Catholic Church south of Riverton. Interment follows at the Arapaho Catholic Cemetery at St. Stephen's.

The rosary is at 7:30 p.m. on Tuesday, May 17, at Great Plains Hall at Arapahoe with a wake to follow at the family home, 325 Great Plains Road, Arapahoe.

Adam Howard Spoonhunter was born in Thermopolis on April 3, 1953, the son of Ward and Margaret (Gambler) Spoonhunter. He was a member of the Arapaho Tribe and grew up on the Wind River Indian Reservation.

He was graduated from Riverton High School after which he moved to Montana and also lived in South Dakota, returning to Arapahoe in 2000.

Mr. Spoonhunter was a health representative for the Shoshone and Arapaho Tribal Senior Health Program. He served for 20 years as a police officer for the Bureau of Indian Affairs in Montana and South Dakota, ultimately becoming a criminal investigator before retirement.

Mr. Spoonhunter was of the Catholic faith and attended St. Stephen's Catholic Church.

His family said he enjoyed going to the casino, being with family and friends, watching Western movies, and reading.