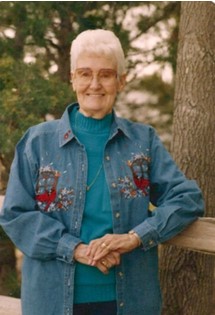 Guestbook 2
Lela I. Merrill of Riverton died at the Help for Health Hospice Home in Riverton early Monday morning, May 16, 2011. She was 89.

Memorial services are at 2 p.m. on Saturday, May 21, at the Davis Funeral Home of Riverton. The Rev. Michael Johnson will officiate.

Lela Irene Portlock was born in Pleasanton, Neb., on May 21, 1921, the daughter of Jesse Jasper Portlock and Bertha Alice (Edwards) Portlock. She attended school in Pavillion and Riverton, having moved to Riverton from Pleasanton in 1935.

Mrs. Merrill was a homemaker, having married Earl Daniel Merrill in Riverton on Oct. 10, 1938.

The family ranched at Crowheart from 1939 to 1956, lived in Riverton from 1956 to 1982, where they raised their three daughters. They retired in 1982 and were snowbirds for several years.They returned to Riverton to enjoy their grandchildren. Mrs. Merrill remained in Riverton until her death.

Her family said Mrs. Merrill enjoyed working with flowers, gardening, cooking, playing with her dogs, Honey and Molly, and her cat, Ginger.

She was preceded in death by her husband, Earl D. Merrill on Oct. 9, 1999; her mother, step-mother, father, granddaughter, grandson, great grandson, sister, and brother.

Memorials may be made to the Help for Health Hospice Home or Amedysis Hospice, in care of the Davis Funeral Home, 2203 West Main Street, Riverton, WY 82501.