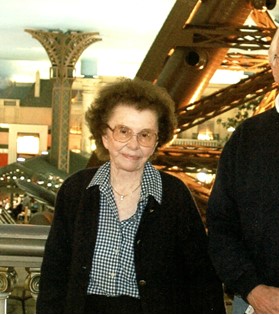 Guestbook 2
Margaret M. White of Riverton died on Friday, May 13, 2011, in Bozeman, Mont. She was 84. Funeral services are at 10 a.m. on Wednesday, June 1, at St. Margaret's Catholic Church in Riverton with interment to follow at Mountain View Cemetery in Riverton. Rosary is at 7 p.m. on Tuesday, May 31, at St. Margaret's Catholic Church. Margaret Mary Doyle was born at Geddes, S.D., on Jan. 3, 1927, the daughter of Dr. James I. Doyle, M.D., and Barbara G. Doyle. She attended parochial and public schools in Rapid City, S.D., and was graduated from St. Mary's Academy in South Bend, Indiana. She attended Loretta Heights College in Denver, Colo., and was graduated from Stephens College in Columbia, Mo. On Feb. 12, 1952, she married Donald P. White at the Immaculate Conception Cathedral in Rapid City, S.D. Their entire married life was spent in Wyoming, having lived in Cody, Laramie, and Casper before making their permanent home in Riverton for 50 years. Her family said Mrs. White was an avid duplicate bridge player and enjoyed her flower gardens and yard. She was a long-time member of PEO Chapter H in Riverton. Mr. and Mrs. White traveled extensively in their semi-retirement years and the family said she enjoyed spending time at their condominium in Jackson and winters in Coronado, Calif. Mrs. White is survived by her husband, Donald P. White; sons, Mark White and wife Robyn of Riverton, and Thomas White and wife Lynda of Bozeman, Mont.; seven grandchildren, and four great grandchildren. She was preceded in death by her parents; a daughter, Mary Margaret Macarah, and a brother, James M. Doyle. Memorials may be made to St. Margaret's School Foundation, in care of the Davis Funeral Home, 2203 West Main Street, Riverton, WY 82501. On-line obituaries are available and condolences for the family may be made at: thedavisfuneralhome.com Services are under the direction of the Davis Funeral Home of Riverton.