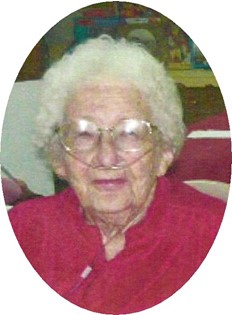 Guestbook 0
Gloria E. Keele of Riverton died at Morning Star Manor at Fort Washakie on Saturday, May 28, 2011. She was 89.

Funeral services are at 2 p.m. on Friday, June 3, at the Davis Funeral Home of Riverton with burial to follow at Mountain View Cemetery in Riverton.

There will be a viewing from 2 to 4 p.m. on Thursday, June 2, and from noon until service time on Friday, at the funeral home.

Gloria Eunice Chidester was born in Redmond, Utah, on Jan. 28, 1922, the daughter of Loris Pratt Chidester and Kirsten Eunice (Sorenson) Chidester. She attended schools in Redmond.

Mrs. Keele was a homemaker, having married Dallas Marion Keele on July 12, 1939, in Redmond, Utah. The family had lived in Riverton since 1965.

She was of the Jehovah's Witness faith.

Her family said she enjoyed knitting, crocheting, fishing when she was younger, painting, gardening, animals, spending time and bragging about her family.

She had worked for LRC Eaton, Katherine Grey, the Neat Repeat, and sold Avon and Artex.

She was preceded in death by her husband, Dallas M. Keele, in 1996; an infant son, Charles T. Keele; a granddaughter, Christina Harris, and an infant granddaughter.

Memorials may be made to Morning Star Manor, in care of the Davis Funeral Home, 2203 West Main Street, Riverton, WY 82501.