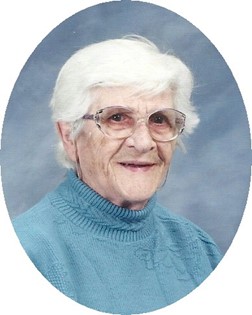 Guestbook 5
Funeral services for Bette B. Healey of Riverton are at 10:00 a.m. on Saturday, June 11, at St. Margaret's Catholic Church in Riverton with the Father David Gau officiating. A reception will immediately follow the Mass. Interment follows at 12:30 p.m. Mountain View Cemetery in Riverton.

Mrs. Healey died Tuesday morning, June 7, 2011, at the Help for Health Hospice Home in Riverton. She was 93.

As a young woman, she attended Evelyn Phillips Dancing School and her family said she enjoyed all forms of dance, including ballet, tap, and acrobatic.

Mrs. Healey worked with the Gay Foster Girls and was a Roxyettes dancer at the Roxy Theater in New York City, which later became the Rockettes at the Radio City Music Hall. She traveled by ship to Cuba, and through the Panama Canal to Hawaii in the 1930’s where she met her first husband Frank Bibin who was stationed in Hawaii. Their son Frank was born there. The family was relocated one month prior to the bombing of Pearl Harbor.

She had worked with chemical warfare for the U.S. War Department during World War II.

Mr. Bibin was taken prisoner during World War II and was listed as a POW who never returned home from the Bataan Death March.

She was a homemaker and lived in various places throughout the United States, coming to Riverton in 1972.

Mrs. Healey was a life-long Roman Catholic and was a member at St. Margaret's Catholic Church in Riverton where she was a volunteer for many church projects.

She was preceded in death by her husbands, Frank Bibin and Patrick Healey; her parents, Ferdinand and Rosalia; a son, Frank M. Bibin; sister, Anna Oliveri; and brother Ferdie Mayer.

Memorials may be made to the Help for Health Hospice Home in care of the Davis Funeral Home, 2203 W. Main, Riverton, WY 82501.

The family would like to thank the Help for Health Hospice Home and the Amedysis Hospice for the care and kindness they provided their mother in her time of need.