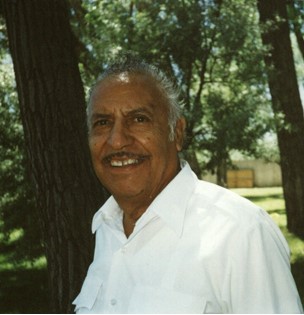 Guestbook 0
Funeral services for Tony Hernandez will be at 10 a.m. Saturday, Aug. 18, at the Davis Funeral Home in Riverton. The Rev. Joe Sifuentes will officiate. Visitation will be from 5 to 7 p.m. Friday, Aug. 17 at the funeral home. Tony Hernandez died at his home in Riverton on Tuesday, Aug. 14, 2007, at the age of 87. He was born on Feb. 11, 1920, the son of Joe Hernandez and Prestina (Aragon) Hernandez. He was the fourth of 11 children. Mr. Hernandez served seven years in the U.S. Army, first in the cavalry until the Army became mechanized. He served during World War II and the Korean War. He also worked in maintenance for Chopping Chevrolet and the U.S. Postal Service. For 26 years, he had been married to Laura Hernandez. His family said that in addition to his family, Mr. Hernandez enjoyed camping and fishing with his grandsons, dancing, and traveling. He is survived by one daughter, Linda Slack and her husband Dennis of Riverton; three grandsons, Lonnie Slack, Leon Slack, and Tony Hernandez; three great grandchildren, Sean Slack, Raymond and Melissa Slack; one brother, Enez Hernandez; two sisters, Dorothy Cordova and Ida Sisneros, and many nephews and nieces. He was preceded in death by his son, Tony Hernandez; his parents, and eight brothers and sisters. Memorials may be made to: Crown of Life Ministries, 222 Tamarisk Drive, Riverton WY 82501. Information about Crown of Life Ministries is available at www.crownofministries.org On-line obituaries are available and condolences for the family may be made at: thedavisfuneralhome.com Services are under the direction of the Davis Funeral Home of Riverton.