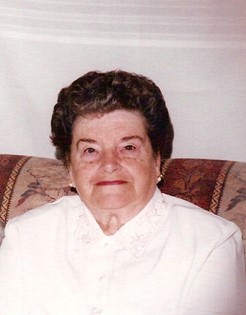 Guestbook 9
Funeral services for Lois J. Annan of Riverton and Pavillion are at 12 Noon on Friday, June 24, at the Davis Funeral Home of Riverton. Burial follows at Mountain View Cemetery in Riverton. Peggy Annan and Teense Willford will officiate. There is a viewing from 7 to 8 p.m. on Thursday, June 23, at the funeral home. Mrs. Annan died on Tuesday morning, June 21, 2011, at the Thermopolis Rehabilitation and Care Center. She was 89. Lois Jeanette Davis was born in Mason City, Neb., on Nov. 20, 1921, the daughter of George Guy Davis and Vida DeNiece (Sphar) Davis. She attended elementary school in LaGrange and 8th through 12th grade at Pavillion, graduating with the Class of 1940. Mrs. Annan was a homemaker, having married Keith L. Annan in Riverton on April 24, 1940. She was of the Presbyterian faith and belonged to the Ladies Aid Society of the Presbyterian churches in Riverton and Saratoga. She was also a member of the Order of the Eastern Star Chapter 12 in Saratoga, and served as a 4-H leader in Dubois. Mrs. Annan cooked at the Dubois School District for many years and sold Avon and Sarah Coventry jewelry. The couple moved to Thermopolis five years ago. Her family said Mrs. Annan liked to crochet, knit, and played the piano in a family band, the Davis Band, for dances at Lysite, Pavillion, and Dubois. She is survived by her husband, Keith Annan of Thermopolis; sons, Larry Annan and his wife Judy of Thermopolis, Lonnie Annan and his wife Vickie of Berthoud, Colo., and Pat Annan and wife Peggy of Broken Arrow, Okla.; daughters, Sandra Willford and husband Teense of Saratoga, and Mickey Anderson and husband Charlie of Riverton; 22 grandchildren, numerous great grandchildren, and several great-great grandchildren; a brother, Bob Davis and his wife Kay of Knoxville, Tenn.; a sister, Barbara Davis of Lynden, Wash. She was preceded in death by her parents, a daughter Karen Hunt, three brothers, and two grandchildren. Memorials may be made to the Help for Health Hospice Program or the American Heart Association, in care of the Davis Funeral Home, 2203 West Main Street, Riverton, WY 82501. On-line obituaries are available and condolences for the family may be made at: thedavisfunerahome.com Services are under the direction of Davis Funeral Home of Riverton.