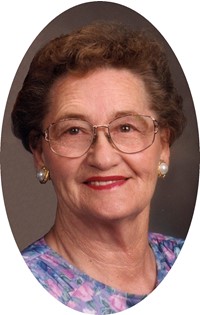 Guestbook 15
Pauline E. Leonhardt passed away Thursday, January 14, 2016, at Sage West Hospital at the age of 90. Services will be held at Trinity Lutheran Church on Monday, January 18, 2016 at 10 am, with Pastor David Magruder officiating. Burial will follow at Mountain View Cemetery. A viewing will be at the Davis Funeral Home on Sunday, January 17, 2016 from 12-1:30 PM.

Pauline was born June 15, 1925 to Steven and Amelia Easton in Mitchell, Nebraska. Pauline was the fourth daughter and the sixth child of 10 children. She married Paul Leonhardt on April 4, 1946 in Torrington, Wyoming. They moved to the Lost Wells Butte area in 1949 where Paul and Pauline owned and operated a dairy farm. Pauline worked at Riverton Memorial Hospital from the mid 1960s, retiring in the early 2000s.

Pauline was well known for her delicious pies. She was an avid George Strait fan and after retirement she loved to read novels and listen to her collection of George Strait CDs.

She is proceeded in death by her parents, her husband Paul, three brothers, five sisters, 2 grandsons, Lance Huber and Brock Leonhardt, and a granddaughter Lynsie Leonhardt.

Memorials may be made to the Trinity Lutheran School in Riverton, WY in care of Davis Funeral Home, 2203 West Main Street, Riverton, WY 82501.

The Davis Funeral Home of Riverton is in charge of arrangements.