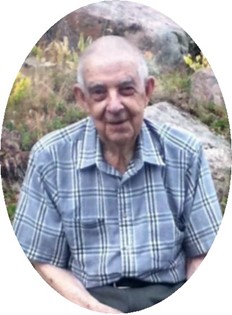 Guestbook 9
Stanley Maxson, 90, of Riverton, died on Thursday, November 17, 2016, at Wind River Health Care. As were his wishes, no funeral services will be held. Stanley was a member of the Christian Church of Riverton.

William Stanley Maxson was born on March 2, 1926 in Liberal, MO to Oren Curtis and Susan (Jones) Maxson, the second youngest of seven children. The family moved to Nebraska and then when he was eight years old they moved to Pavillion, WY where they lived on a farm. He graduated from Pavillion High School with the class of 1944.

After graduation he enlisted in the U.S. Army and served in the Korean War. He was honorably discharged and returned to Pavillion. Upon his return he met his wife, Lucille Marie Heald; they were married on June 15, 1952 in Palisade, CO. They had five children that they raised in Colorado and Wyoming.

He enjoyed collecting coins and reading western novels. He loved to garden with his wife before she passed. He always loved being involved with his children, grandchildren, and great grandchildren.

He was preceded in death by his parents, Oren and Susan Maxson; his wife of 57 years, Lucille Maxson; their son, John Maxson; brothers, John Maxson, Roy Maxson, Arthur Maxson, and Alfred Maxson; and sisters, Elnora Maxson and Dorothy Eisemann.