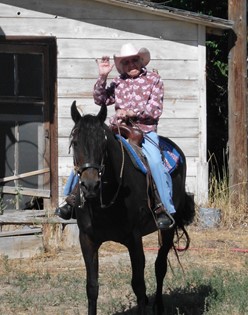 Memorial services are at 2 p.m., on Saturday, November 5, 2011 at the Davis Funeral Home of Riverton.

Irma May Williams was born November 2, 1911 near Shoshoni to Lyle and Cora May (Murphy) Williams. She grew up and attended country school in the Shot Gun Butte area west of Pavillion. She finished her education in the Red Canyon School House.

She married Sam Hancock on December 11, 1926 in Lander. He preceded her in death on December 20, 1965. Together they ran the “Scarlett Hills” Ranch in the Red Canyon where she lived for 44 years.

She married Jerome “Jerry” McGuire on November 20, 1972, at the Lander Methodist Church. The couple lived in the Red Canyon area out of Lander before moving to the Riverton/Shoshoni area in 1978. Both Mr. and Mrs. McGuire loved Morgan horses and this led them to their business as Scarlett Hills Morgan Horses in Paradise Valley north of Riverton. They bred a top line of Morgan horses in the U.S., starting new blood lines for people throughout the nation.

Her family said she was the first queen for the Lander Old Timers Rodeo in 1979. She went on to the National Competition in Las Vegas and was voted Ms. Congeniality.

They said she enjoyed riding and farming on horses. She was able to run horse drawn farming equipment and get the work done when tractors couldn’t. She also enjoyed needlepoint, embroidery, traveling and deep-sea fishing.

She is survived by her son, Bill Hancock and wife Ada of Pavillion; daughters, Patsy Hancock of Riverton and Edna Bringolf of Sand Draw; numerous grandchildren, great, and great great grandchildren; and sister, Wanda Lucas of Riverton.