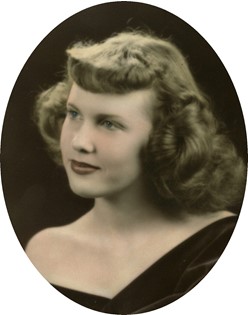 Joby was born in Sacramento, Calif., on September 3, 1931, the daughter of Carl Winn Brainard and Helen V. (Chapman) Brainard. She spent her childhood years in the Sacramento area and graduated from Grant Union High School in North Sacramento, Calif.

Joby meet the love of her life Donald R Hearth while still in school. They married in Sacramento on November 27, 1949. She worked for the phone company for many years, but being a homemaker made her the happiest. She loved cooking for big family gatherings and sharing her new recipes. Her sewing and craft talents were endless. Her creativity flowed through in her art work and poetry writing. She has several published poems and won numerous awards from the International Society of Poets; of which she was a member.

Joby’s husband, Don had a long career with the phone company which took them too many different places. She would always look forward to the new adventures, meeting new friends and of course decorating their new home. In 1992 they decided to move to Lander, Wyo to be close to family and life long friends they had made. Once in Lander Joby wasted no time in getting involved in her community. She joined the Epsilon Sigma Alpha sorority. She shared her many talents with the ESA, and talked most about baking pies for their annual fundraiser.

Her unfailing faith, loving devotion to her family and friends and her compassion for life will be greatly missed.

Joby is survived by her husband, Donald R. Hearth of Lander; her daughter, Donae Bezanson and her husband Richard Bezanson, both of Lander; their three children; Kristopher Mindrum, Darcey Cowardin and Jessica Bezanson, four great grandchildren, and numerous other family members. She was preceded in death by her parents, Carl and Helen Brainard, and her sister, Aletha Sewell. Cremation has taken place and no services will be held. Memorials may be made to the Epsilon Sigma Alpha sorority or Amedisys Hospice, in care of the Davis Funeral Home, 2203 West Main St., Riverton, WY 82501. On-line condolences may be made at: theDavisFuneralHome.com