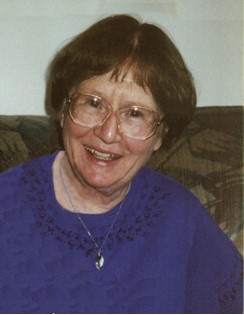 Guestbook 8
Barbara Jane Wood Campbell of Riverton died Saturday, May 25, 2013 at the Help for Health Hospice Home in Riverton. She was 91 years old.

Per her request graveside services will be Saturday, June1 at 2pm at Mountain View Cemetery. A viewing will precede the service at the Davis Funeral Home at 1:00 p.m.

Barbara Jane Starks was born October 26, 1921 in Harrison Nebraska daughter of Nicholas and Blanche (York) Starks. She was one of 9 children. She grew up in Agate, Nebraska and it was here with her family that she learned the value of hard work and perseverance. Her mother died at a young age and Barbara helped her father with the rest of the children. After graduating high school, she had her first teaching assignment in a one room rural school in Sioux County, Nebraska where she was a teacher for some of her younger brothers and sisters.

She married Leonard Lyle (Woody) Wood shortly before World War II and while he was fighting in the Navy she continued with her teaching and going to college to get a teaching degree. Barbara had a variety of teaching experiences in Nebraska, including a year as a junior high teacher and a year of teaching 36 first graders.

Barbara and Woody had two children, Vicky Lyn and Leonard Leon. In 1957 they moved to Riverton where Woody operated an Auto Repair shop and Barbara began her 28 year career of teaching first grade in Room 14 at Lincoln Elementary School. They bought some property on 8 mile road where they both enjoyed all the chores involved in starting their “Little Ponderosa”. Woody died in June of 1981 but Barbara continued to work on her little farm and teach school. She retired from teaching in 1985 and filled her time with gardening, sewing, crafting, painting, fishing and spending time with her family.

In 1991 she married Don Campbell and they had a wonderful life of travelling, gardening, entertaining grandchildren, and spending time with each other and family. They both loved to play cards, especially pinochle, with her twin sisters, Jean and Joan and Joan’s husband Joe. It was entertaining for all when those games began.

Barbara was a member of the First Christian Church and was active in her church activities. She was a member of a local extension club as well as the Delta Kappa Gamma society. Barbara did not have any trouble filling the days of retirement. She was an excellent seamstress, loved to do any kind of crafts, and made beautiful porcelain dolls. She loved to garden and raised all of her own vegetables which she would put up for the winter. She raised chickens which she also prepared for the freezer so family could enjoy them all winter long. She was an excellent cook and loved cooking big meals for family and friends. Barbara loved to fish and spend time in the out of doors and enjoyed many hours at the cabins of her son Leonard and her husband Don just enjoying all the beauty of God’s world.

Barbara’s greatest joys in her retirement years were her grandchildren and great grandchildren and they said that she was the best grandma ever. She taught them to read, to sew and do crafts, all about gardening and cooking. Spending the night at Grandmas and baking bread or pies with her is one of their favorite memories.

Memorials may be made to the First Christian Church or Help for Health Hospice House in care of Davis Funeral Home, 2203 West Main Street, Riverton, WY 82501.