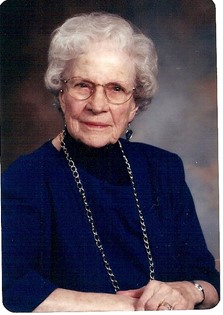 A funeral service will be at 2 p.m. Thursday, Feb. 7, at the Davis Funeral Home of Riverton with the Rev. Cleve McSwain of the Pavillion Methodist Church officiating. Mrs. Piper's grandson, Tyler Lynde of Mocksville, N.C. will give the eulogy.

A dinner will be served at the United Methodist Church of Riverton immediately following the service. All are invited.

Inurnment of Mrs. Piper's ashes will be at Mountain View Cemetery in Riverton at 2 p.m. Friday, Feb. 8.

The 93-year-old mother of five is survived by two sons and three daughters -- John Howard Dewey of the Lost Wells Butte area, Larry David Dewey of Cottonwood, Ariz., Nancy Josephine Shoop of Lost Wells Butte, Virginia Estelle Stroup of Alva, Fla., and Marilyn Joyce Drew of Powell, along with their spouses. There are also 15 surviving grandchildren and 25 great grandchildren.

Marion Otto was born on Aug. 25, 1914 in Eola, Ill., to Joseph Bruce and Laura E. Otto. She was the youngest of their eight children and was preceded in death by her parents and all of her siblings.

In 1917, she moved with her family to Campbell County, Wyo., where her father had purchased a homestead relinquishment seven miles east of Gillette and later ran a cream station. She attended schools in Gillette and was graduated from Campbell County High School as valedictorian of her class in 1932.

She then taught in a rural school north of Gillette for three years before marrying Howard E. Dewey on Oct. 16, 1935. The young couple then moved to the bridegroom's homestead 14 miles north of Riverton on Tea Pot (Five-Mile) Creek. The first two of their five children were born while they lived in a dugout on the homestead.

Six years later, Mr. and Mrs. Dewey bought the Spencer place, and moved a half-mile west of their original homestead. Expansion had come and the family home became a two-story frame house.

In 1952, Mrs. Dewey returned to teaching school after being offered a teaching contract by the Fremont County School Board at Pavillion. In order to continue in her field, she would have to earn a bachelor's degree in education by 1962. A scholarship she had been awarded from the University of Wyoming in 1932 paid for seven terms of summer school and a multitude of extension courses, helping her to complete the goal and qualify for a Wyoming teaching certificate. She taught third grade at Pavillion Elementary School until 1975 when she retired and spent the winters in Arizona with her husband.

She remarried in 1983 and became Mrs. Ray Piper, living in Anaconda, Mont., with her new husband for 11 years. After being widowed again in 1994, she moved back to Wyoming to be near her family.

She underwent cancer surgery in 1994, which left her without a voice box. For the rest of her life, her primary means of communication was to use a battery-operated speaker that vibrated against the muscles in her throat, producing sound. Always the teacher, she enjoyed demonstrating this process to children.

Mrs. Dewey Piper was an active member of the OAO Extension Club for 62 years, a University of Wyoming alumnae, and a member of the United Methodist Church in Riverton where she faithfully served on the prayer chain and attended the Methodist Women's Fellowship.

Her family said that throughout her lifetime, she enjoyed reading and working crossword puzzles, which she said, kept her mind active above a third grade level.

Memorials may be made for MS or the Help for Health Bus, in care of the Davis Funeral Home, 2203 West Main, Riverton WY 82501.