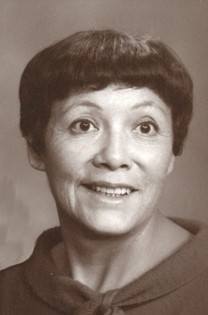 Anita Marie Warren was born on July 23, 1920 at St. Stephens, WY to Ben and Pauline (Underwood) Warren. She was given her Native American name of “CE H BEH. N IITOU” which translated means, “Hollers Above”. She grew up near Arapaho and attended schools in St. Stephens and Riverton. She was graduated with the class of 1940 from Riverton High School. She later attended Central Wyoming College and was graduated with an Associates of Science Degree in 1980. She continued to further her education until 1987.

She was baptized into the Catholic Faith.

After she graduated high school she worked at Fort Washakie where she met her future husband, Alfred “Sonny” Collins Portwood. During WWII, before Sonny was shipped out to the Pacific Theater, Anita went to California and they were married on April 19, 1944 in Avenal, CA. They later lived in California until 1953 when they returned to Riverton to raise their two daughters.

While raising her daughters she worked at Ashgrove Elementary and later at St. Stephen’s Elementary. After she retired she worked through Fremont Counseling Services Out Reach Program, working with the mentally ill on the Wind River Reservation. She finally retired for good when her husband became ill and she cared for him until his death in 2002.

She was a Democratic Party member and was the State Delegate to the National Democratic Nominating Convention in 1968.

One of her most favorite things was belonging to the Riverton Gem and Mineral Society. She also loved traveling and had many trips to Norway to visit her daughter, Cheryl, and her grandchildren. She traveled all over the country accompanying her daughter, Michele, during her reign as Miss Indian America XI. Later in life she traveled to Mexico, Italy, France, Spain, and Hawaii. She shared many stories of her travels with family and friends.

In lieu of flowers the family request memorials may be made to donor’s choice in care of Davis Funeral Home, 2203 West Main Street, Riverton, WY 82501.