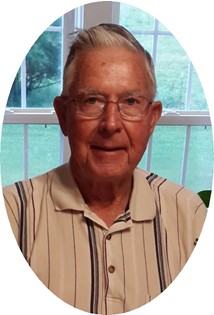 Herb, his three brothers, and sister were raised on the farm in North Dakota. He was graduated from high school in Elgin, North Dakota. He lettered in basketball there. He entered the US Army in April 1946, and served his country in Anchorage, Alaska. Herb married Genevieve Chrismore and she accompanied him to Anchorage. To this marriage were born twin sons, Douglas and Dennis, in 1947. The family lived in Lemmon, South Dakota.

Herb worked as a salesman for Valley Motor Supply Company in Lemmon and then later as a manager for the company in Glasgow, Montana. After leaving Montana, he operated an oil distribution business in Spokane, Washington. He was subsequently employed by Boeing in the Seattle area as a parts scheduler. It was while he worked for Boeing that he would meet Arlene who became his wife in 1970. He would work for Hamlin Electronics just prior to his retirement. Herb was an avid golfer. He made four holes-in-one and regularly shot better than his age for scores.

He enjoyed fishing with the family. Herb often joined the family for the annual fishing trip around Memorial Day at Jackson Lake. He wasn’t quite as enthused by the snow and freezing rain that they occasionally encountered.

Herb’s farming heritage would emerge as he raised raspberries in Seattle as well as cactus and oranges in Tucson. He was a member of the Elks, the Tucson Estates Golf Association, and the Shrine and Freemasons.

After moving from Seattle to Arizona, Herb met Geneva Tharp and they became very close friends. Herb remained active and independent all his life. In 2015, he went to Washington, DC on an Honor Flight for WW2 veterans. Even the month before his death, he had driven to Wyoming and to South Dakota to visit his older brother, Roy, and older sister, Ruby.

Herbert was preceded in death by his parents, his brothers, Alvin and Norval, his first wife, Genevieve, and his last wife, Arlene.

Herb’s friends and acquaintances in Arizona, Wyoming, Kansas, and South Dakota all spoke well of him and were greatly saddened by his loss.

No account of a person’s life would be complete without considering their relationship with God. Both Douglas and Dennis had the privilege of knowing that their father, Herb, had placed his trust in Jesus as the forgiven of his sins and the Lord of his life.

Memorials may be made to Gideon’s International in care of Davis Funeral Home, 2203 West Main Street, Riverton, WY 82501.