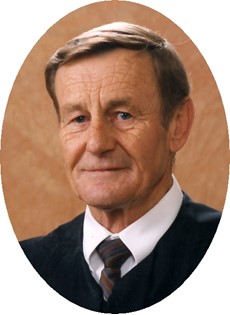 Guestbook 22
Former County and Circuit Court Judge Don H. Hall, or “Judge Hall”, as everyone fondly called him, passed away on Friday, December 30, 2016, at the age of 80, after battling chronic obstructive pulmonary disease (COPD) the past two years. At his request, there will be no services. Arrangements are under the direction of the Davis Funeral Home and Crematory.

Judge Hall was born on August 29, 1936, to parents Leslie and Marguerita Hall, the third of four sons. He was raised in Sheridan, Wyoming, and graduated from Sheridan High School in 1954. After attending Sheridan Community College, he was drafted into the U.S.Army, and served most of his tour of duty in Greenland, receiving an honorable discharge from the Army in 1961.

After his military service, he moved to Washington, DC, where he worked for the Federal Bureau of Investigation and met his future wife, Delores Ford. They married on March 17, 1962 in Denver, Colorado and celebrated 54 years of marriage this year. After a few years in Denver, Don decided to attend the University of Wyoming College of Law, and completed his Juris Doctorate degree there in 1968. He worked for a number of state agencies after obtaining his law degree, including the Wyoming Community College Commission, the Wyoming Game and Fish, the Wyoming Attorney General, and at the University of Wyoming, providing legal coordination services.

In 1978 Don and wife Delores, and sons Steve and Greg, moved to Lander, Wyoming where he entered private practice with John Vidakovich and later the law firm of David Hooper. He also worked as the Fremont County Public Defender, for several years, and the family moved to Riverton, Wyoming in 1978. Don was appointed to serve as a County Court Judge by Governor Herschler on June 8 , 1982., and after the law changed, Judge Hall became a Circuit Court Judge, retiring from that position on December 31, 2004, after serving 22 years on the bench. Judge Hall was always known for his dry sense of humor, his no-nonsense advice in the courtroom, and his fair treatment of all those people who appeared before him.

Judge Hall enjoyed camping, fishing, hunting and four-wheeling with his many friends. After retirement, Don made a few cross-country trips with wife Delores to visit her coal-mining hometown in West Virginia, and in October, even though Judge Hall was very ill, he managed to travel to St. Paul, Minnesota, to attend his son Steve’s wedding.

Survivors include wife Delores, son Greg and wife Kinsey, all of Riverton; son Steve and wife Jennifer of St. Paul, Minnesota, grand-daughter Cade Kirkham of Laramie, and brothers Harold (Pat) and Bob (Barbara). He was predeceased by brother Bud Hall, and both of his parents.

In lieu of flowers donations may be made to Friends of Hospice in care of Davis Funeral Home, 2203 W. Main Street, Riverton, Wyoming 82501.