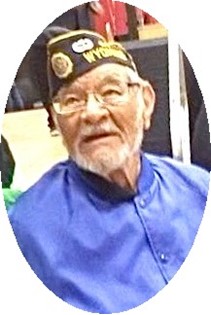 John Anthony Warren, Sr. was born February 13, 1930 in Riverton, WY to Benjamin Warren, Sr. and Pauline Underwood Warren. He grew up in the Arapahoe area and attended St. Stephen’s Indian Mission School through the 10th grade. Later he earned his G.E.D. in September 1971 and continued to earn his Associates Degree in Secondary Education from Central Wyoming College in May 1979.

He was a member of the Roman Catholic Faith and was a lifelong communicant of St. Stephen’s Catholic Church. He served many years on the Parish Council.

John worked early on as a ranch hand for the Arapaho Ranch near Thermopolis, WY. He enlisted May 12, 1950 into the U.S. Army at Fort Benning, GA. He completed Basic Airborne Training in 1951, being a member of the Company I 6th Infantry Regiment. His unit was stationed in Germany during the Korean War, earning him an Army Occupation Medal (Germany). He was honorably discharged on May 2, 1953 as a Private 1st Class from Camp Carson, CO.

He held many civic positions including Northern Arapaho Business Council as one of the youngest candidates elected. He was a Police Officer for the B.I.A. with “King” his police dog. He served on the St. Stephen’s Indian Education Board, helping to secure funding for the construction of the present St. Stephen’s Elementary School. He also held positions on the Sky People Higher Education, instructor at Lander Valley High School for Native American Studies, Central Wyoming College Board of Directors, among many others. He served on the board of directors for the Plains Indian Museum re-dedication in 1979 at the Buffalo Bill Historical Center of the West in Cody, WY.

John served as a Shoshone and Arapaho Tribal Court Judge for many years. He often helped change the direction of many people’s lives and futures toward the positive. He was strict but fair.

Survived by the families of Warren, Runs Medicine, Brown, Spoonhunter, Portwood, Ramsdell, Underwood, Bowers, Moss, Posey, Goggles, and Pedro. Apologies to any family unintentionally omitted, as we have a very large family.