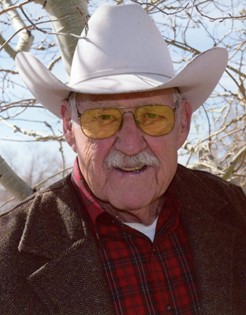 Guestbook 6
A Celebration of Life will be held on Saturday, August 22, 2020 at 10:00 am on the lawn at Under Command Ministries at 212 StoneDrive (the corner of Stone and Park) for James "Jim" Glen Allard, 82, who passed away on Wednesday, July 15, 2020 at Help for Health Hospice Home in Riverton, Wyoming.

Jim was born on October 8, 1937, in Riverton, Wyoming, son of Harry T. and Myrtle (Soss) Allard. He served in the United States Army for two years before he was honorably discharged.

Jim married Joyce Roland in December of 1956 in Pavillion. Joyce passed away in February of 1993. Jim then married Sali Muggelberg-Freese-Smyth in June of 2000 at their home in Riverton. Throughout his younger days, Jim spent 14 years working for Pacific Power. He also ranched at Deep Creek and Copper Mountain and farmed in Pavillion. Jim was a core driller and heavy equipment operator in the Uranium Mines for many years before he found his passion in bronze sculpting wildlife and western art which he won many awards for. Jim loved his work as an artist. He took pride and spent much joyful time at his cabin in Atlantic City, relishing the freedom to roam the hills on his 4-wheeler. Jim's best childhood memories were spent in the Gas Hills hunting, fishing as well as trapping. He continued enjoying going on rides in the Gas Hills throughout his adult life. Jim appreciated his sheep wagon, custom made by Dan Ranch.

Jim was a born again Christian, actively attending Under Command Ministry in Riverton.

Mr. Allard was preceded in death by his parents, 2 brothers, Lawrence and Chuck and his sister, Anna.