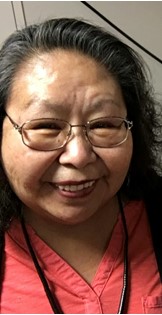 Guestbook 8
June Shakespeare, 65, of Arapahoe, Wy passed away Saturday, December 12, 2020 at the Wyoming Medical Center in Casper. Graveside funeral services will be 10:00 a.m., Thursday, December 17, 2020 at the Shakespeare Family Cemetery in Arapahoe. COVID-19 precautions and guidelines will be followed. Social Distancing and wearing of mask is expected.

June was born January 1, 1955 in Clinton, Oklahoma to Thomas Jr and Aline (Bates) Shakespeare. She grew up in the Arapahoe area attending elementary school at Arapahoe & St. Stephens and High School at Institute of American Indian Arts in Santa Fe, NM, and graduating from Riverton High School. She continued her education at the National College of Business in Rapid City, SD, University of Colorado in Boulder, CO, Front Range Comm. College in Westminster, CO, and Central Wyoming College in Riverton receiving her Social Science Degree.

June was a strong advocate for her community and was employed in jobs that reflected that. She worked in the education field many years for local schools, was the Indian Education Director for Dist. #25 and served on the School Board for Arapahoe School Dist. #38. She also served her tribal people in many Social Service fields in Oklahoma and Wyoming.

She grew up traveling, dancing and attending Powwows with her family and continued to travel as much as she could to keep in contact with friends and family. She loved basketball and playing in her younger days, enjoyed watching her family play and was a long time Laker fan. Beadwork was a continuous hobby along with teaching the meaning of items that she made, she had a tremendous wealth of knowledge and would share many stories, songs, pictures and prayers. She had a great sense of humor and loved spending time and visiting with family. She was a member of the Catholic faith and also believed in the Native American Church.