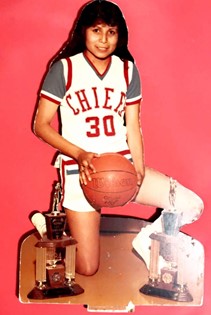 Nina loved the game of basketball, starting from an early age, and played at a Head Start program. During her final year of high school at Wyoming Indian, where her basketball career flourished, Karen was named an All-State basketball star in the state of Wyoming at the storied program of Wyoming Indian school. Consequently, she received a scholarship to Navajo Community College (NCC). She also played for the Lady Rustler at Central Wyoming College a few years after. After her time in college, Nina traveled around the country playing basketball in sundry places, including in Albuquerque, New Mexico and in Canada as well. After traveling, she decided to come home to the Wind River Indian Reservation, in Wyoming, and continued with her passion by coaching different youth teams and schools. If you knew Karen, you would’ve known that she played basketball. In many ways, it was her passion.

Karen was a member of the Roman Catholic Church and believed in the ceremonial ways of the Northern Arapaho. She grew up kind hearted, always greeting people with a smile and was always giving more than what she had to make sure that her loved ones were receiving love and affection.

Graveside services will be held Wednesday, January 6, 2021 at 11:00 a.m. at Arapaho Catholic Cemetery.

Feast and ceremonies will be held at a later date.

Karen’s family asks that all in attendance would follow Covid-19 safety precautions at her services. Masks and social distancing will be enforced.