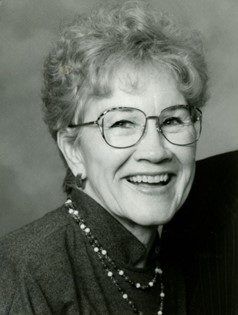 Funeral services will be 10:00 a.m., Friday, July 30, 2021 at the United Methodist Church in Riverton where she was a member for many years. Interment will follow at Mountain View Cemetery. Visitation will be held Thursday, July 29th, 5:00 p.m. until 6:00 p.m. at Davis Funeral Home.

She moved with her family from Stamford, S.D. to a Pavillion area farm in 1938 when she was 15, where she and her sisters hand-peeled the bark from logs to build their first Wyoming home.

She attended a S.D. country school in grades 1-8, then Okaton, S.D. High School, and graduated from Pavillion, WY High School in 1940. She attended the University of Wyoming, graduated Green’s School of Beauty Culture in Rapid City, S.D., and took extensive journalism and creative writing classes in the years that followed.

Betty married her high school sweetheart, Ned LeRoy Case, in 1942 in Casper. Their son Gene Allen was born in 1944.

The family rented and owned farms in the Pavillion area for the next 10 years. Betty worked as secretary and bookkeeper for the Pavillion School District for the two years before they moved to Casper and Laramie for Ned to earn his B.S. degree in 1957.

She worked in business offices in Wyoming and Oklahoma for the next 15 years.

In 1982, Betty and Ned retired to Pheasant Crest Farm near Midvale, where they hosted many family and neighborhood gatherings. There, she followed her natural leanings to become a freelance writer, authoring two books, “Maggie: Set Free in The Wyoming Rockies,” the recipient of Wyoming and National Press Women’s awards, and “This is Wyoming – Live,” named A Talking Book and published on tope by the National Association for The Blind.

Betty was a contributor to the books, “Leaning into The Wind,” “Riverton Family Stories,” and a Wyoming Poets book titled, “If You Would Love Wyoming.”

She earned the 1994 Governor’s Arts Award for Wyoming Writers, Inc., an organization she served on the state level for five years and for which she received the “Emmie,” their highest award for meritorious service.

For more than 30 years, Betty wrote biweekly columns and numerous feature stories for The Riverton Ranger newspaper, for which she won two Wyoming Press Association Pacemaker Awards (the last one she received was in 2020), National Press Women and Wyoming Historical Society Awards.

She was also a lifelong artist, decorating their homes with her creations.

Memorials may be made to the Help for Health Hospice Home in care of the Davis Funeral Home, 2203 W. Main Street, Riverton, Wyoming 82501.

On-line condolences may be made at TheDavisFuneralHome.com. Services are under the direction of the Davis Funeral Home.