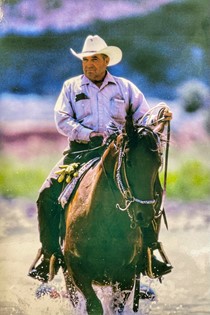 Guestbook 14
Lonnie M. Mantle, 86, of Pavillion, Wyoming died Sunday, December 26, 2021 at the Hot Spring County Memorial Hospital. Funeral service will be held on Friday, December 31, 2021, at the Sunnyside Church of the Nazarene in Kinnear with Pastor Doug Hanner officiating. A viewing will be held from 12:00 pm to 1:00 pm with the service starting at 1:00 pm. The funeral will be Livestreamed via Facebook http://www.facebook.com/sunnysidekinnear. A dinner will follow the service at 3:00 p.m. at the Pavillion Rec Center, 424 S. Main St, Pavillion, WY 82523. Burial will be at the Mantle Family Cemetery, 366 N. Pavillion Road, Pavillion, WY 82523, with the procession starting at the ranch with a horse-drawn wagon on Saturday January 1, 2022, at 11:00 am, all are welcome. Please dress accordingly for the weather.

Lonnie M. Mantle was born July 1, 1935 to Charlie and Evelyn Mantle, on the way to the hospital-at a neighbor’s house in Elk Springs, Colorado (which doesn’t exist anymore). His family homesteaded at the bottom of the Hells Canyon on the Yampa River of what later became a part of Dinosaur National Monument. That’s a 50-mile ride to town. Because they lived at the bottom of the canyon, travel in and out of the ranch was done horseback or in a horse drawn wagon, ground was cleared and hay was put up with teams. So, it’s almost safe to say Lonnie was born on a horse.

Imagine smooth sandstone cliffs, 1100’ tall and 700’ undercut. This is where the Mantles played. Lonnie learned early to ride and rope, gathering cattle and breaking horses – often at the same time! In hindsight it’s not likely that the Mantle's EVER started with gentle horses. Their horses got that way with wet saddle blankets and time; Imagine riding a bucking horse on terrain that has a 45-degree angle and ends at an 1200' first step; that, is a damn site harder than riding in a flat, groomed arena. Therefore, it kind of goes without saying, that the favorite diversion from the ranch work was rodeo and that Lonnie and his brothers cleaned up (won) most of the rodeos they entered. Due to the remoteness of their ranch, Lonnie and his siblings, as well as any neighboring ranch kids, were educated through the 8th grade by either a private teacher or by his mother, Evelyn. Lonnie is quick to laugh that his mom flunked him in the fourth grade, due his trapping and fishing hobbies taking too much time from his studies. Education was very important to the Mantle family and Lonnie went on to get his high school diploma at the Wasatch Academy boarding school in Mt. Pleasant, UT. He then went to Colorado A&M, now known as Colorado State University, where he earned a bachelor’s degree in Animal Science in 1957. Lonnie then entered the Army and served most of his enlisted time in Germany, being honorably discharged in 1960.

Lonnie returned to work on the family ranch, but eventually left it to be carried on by his younger brother, Tim. The ranch was a very hard place to make a living, and could not sustain two families. Lonnie jokingly told Tim he was sorry to do it to him, but would give him his share of the cows as a peace offering for leaving. Lonnie set out on his own; rodeoing, breaking and shoeing horses, cutting and selling timber, driving truck, building corrals – just about anything a young man could do to make a dollar, Lonnie had a hand at. He was cowboying near Craig for his older brother, Pat when he met a pretty high school teacher named Grace Spykstra. She had a job & a new car… jackpot!! The romance blossomed and they were married on January 20, 1962. Lonnie cut and sold a load of cedar posts to fund their honeymoon!

Lonnie had visited the Fremont County area with college rodeo pals in the 1950’s, and loved the country. He and Grace moved to Riverton shortly after being wed. Grace got a job as a teller at the bank and Lonnie worked at the sale barn as well as continuing to shoe and break horses, and to hit the local rodeos. Saddle bronc riding was Lonnie’s favorite event, but would enter bareback and bull riding if the purse was big enough or the all-around prize was a good one! Lonnie won many trophy buckles and a couple saddles throughout his rodeo years, but honestly needed the money to support his growing family. They bought their first home and small bit of land in Dudlyville, on the little Popo Agie River between Riverton and Lander. Here Lonnie built corrals and sheds, traded some cattle and some horses, and brought what is arguably the first ‘shoeing chute’ to the country. By tipping a horse on its side, a man could shoe many more horses in a day than by doing it on the ground. And Lonnie needed to shoe lots of horses quick as his business of leasing horses took flight.

His first contract was Grand Teton Lodge in Jackson Hole. Lonnie showed them on paper how much money they could save leasing horses as opposed to owning them. They ordered 150 for the summer of 1965! Problem was, Lonnie only owned 4 head at the time! So, Lonnie borrowed money from his dad to buy 150 horses, which were then worth about 7 cents a pound. Thus, the start of the largest and oldest family-owned horse leasing business in Wyoming, Wyoming Horses. Lonnie would travel the country visiting ranchers throughout the late fall and winter, from northern WY down to CO and UT, buying horses and making lifelong friends. Big country ranchers would sell Lonnie their horses that were getting too old for the rigors of a 20-mile day chasing cattle; they made excellent guest horses and would live another dozen years with the lightened seasonal work.

Lonnie and Grace grew the business over the next 40 years, supplying horses for summer use at guest ranches, trail riding operations, children’s camps, and for fall lease to outfitters and private people wanting to go to the mountains on pack trips or hunting. They serviced contracts in a dozen states, owning as many as 1200 horses in the 1980 and 90’s!! Lonnie knew each horse by name and could remember where he bought him, how much he paid for him, who leased him last summer and if the horse was gentle for little kids or was kinda a bronc! And if the horse was a bronc, Lonnie or one of his irreplaceable friends, George Coen and Alfred Armajo, would ride it, break it, shoe it (and thousands of other horses) ...and make productive citizens out of the so-called unusable horses. Lonnie was unrivaled when it came to matching kids and adults alike with a horse that would fit them, be it rodeo horses, 4-H horses, ranch horses or just trail riding horses. He could see the diamond underneath and knew how to cut and polish it.

Lonnie continued to rodeo until his 40’s, when he retired for good. By then he had three kids and their rodeos became more important! There never was a shortage of ponies and horses for the kids to ride. And although his business was leasing horses, Lonnie was known to ‘loan’ a horse to any kid that needed one. One horse named Rainbow was given to three different kids and then bought back by Lonnie each time! Lonnie later had a string of bucking horses and contracted many local youth and amateur rodeos. He would never refuse a kid who wanted to get on a few broncs, putting on practices for many rough stock riders. And Lonnie knew which of his “dude horses” would also buck! In early June 1984 he was supplying the bucking horses at the Pinedale High School Rodeo, and also had a semi load of horses to deliver to area outfitters at the same time. Unbeknownst to the HS rodeo athletes AND to the outfitters, the horses did both that year! After the rodeo, he loaded the bareback and saddle bronc horses back into his semi and delivered them up the road to the outfitters!!

Finding winter feed for hundreds of horses was a definite challenge. Lonnie found ranches and farms near Pavillion where the lighter amounts of snow and winds kept the feed accessible. For many decades Fremont County folks were accustomed to seeing hundreds of horses being trailed from farm to farm, up and down the dirt roads, and even right through the town of Riverton several times!! In 1972 Lonnie bought a 500-acre farm on Five Mile Creek near Pavillion, from Jim Barquin, with just his word and a handshake. Lonnie told Jim he didn’t have the money until the spring horse lease money came in, Jim just smiled and said “Ok, so pay me then”. Lonnie was running his 500 horses on 7/10’s of an acre near Hudson, when they bought the Pavillion land!

As the tourism business grew, Wyoming Horses grew as well. In the mid 1980’s Lonnie bought the neighboring farm ground, another 1000 acres. His cattle herd continued to grow as well, and he was soon running 400 yearling steers. Summer pasture on Copper Mountain provided another great place to make young horses gentle!

Lonnie had the ability to raise cattle, horses & people to become better than they were before they met him. He showed horses and people what was inside them and how to use it. He had great expectations for every horse & every person who wanted better and he taught so many to become self-reliant and to be able to teach it to others.

Always an avid fisherman, Lonnie and his family and friends would take many pack trips into the Wind River Mountains. It was a great way to break a young horse into the business, and Lonnie would often pack a bronc on the way into the mountains and be riding him by the end of the trip. At the age of 81, Lonnie and the family went on a 6-day fishing trip into the Popo Agie Wilderness area, making the 18-mile ride in and out with just a few aches. He would saddle up every day and go with the family to the next lake, usually outfishing everyone! In the evenings, his dutch oven biscuits were always a hit!

In 2000, Lonnie and Grace handed the reins of the Wyoming Horses business and most of the ranch ground to their youngest daughter Dar and her husband Bob Vogel. With their help, Lonnie continued to run about 300 mother cows, and still owned some of the horses in the leasing business. Grace passed away in 2007 and is dearly missed by Lonnie and the family.

Memorials may be made to the Fremont County Rodeo in care of the Davis Funeral Home, 2203 W. Main Street, Riverton, Wyoming 82501.

Condolences may be made at TheDavisFuneralHome.com