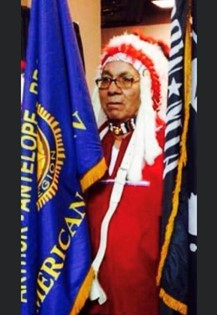 Guestbook 9
Lifelong Wind River Indian Reservation resident, Wayne Benedict Brown, 80, passed away on Monday, May 16, 2022 at the Wyoming Medical Center in Casper. A rosary will be held starting at 7:00pm on Wednesday, May 18, 2022, Davis Funeral Home in Riverton. A second rosary with a wake will be at 7:00pm on Thursday, May 19, 2022, at Eagle Hall at St. Stephen’s. The funeral service will be held at 10:00 am on Friday, May 20, 2022, at St. Stephen’s Catholic Church with burial to follow at Arapaho Catholic Cemetery.

Wayne Benedict Brown was born on May 12, 1942 in Arapahoe, WY to Asa and Myra (Jenkins) Brown. He grew up on the Wind River Reservation where he lived his entire life. He graduated from Flandreau Indian School. He then joined the U.S. Marines where is served for four years during the Vietnam War.

Wayne was baptized into the Catholic faith and was a member of St. Stephen’s Catholic Church.

He was employed with the St. Stephens Indian School for 36 years as a bus driver. He retired from that job.

Wayne enjoyed reading the newspaper, going for walks, spending time outdoors, attending Pow Wows, and watching his favorite team, The Golden State Warriors. He especially loved raising his grandchildren and watching them play in all types of sports.

He was preceded in death by his parents; grandparents and siblings.