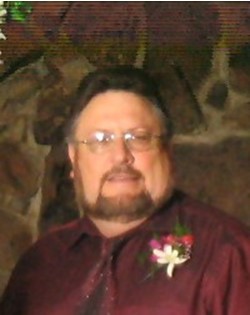 Guestbook 11
Funeral services for John H. Russell, Jr., of Kinnear will be at 10 a.m. Thursday, June 7, at the United Methodist Church of Riverton. The Rev. Jon Martin will officiate and interment will follow at Mountain View Cemetery in Riverton. His family said casual dress for the funeral is deemed appropriate by the family. There will be a viewing from 5 to 6 p.m. Wednesday, June 6, at the Davis Funeral Home in Riverton. Mr. Russell died Friday, June 1, 2007, of sudden cardiac arrest. He was 57 years old. John H. Russell, Jr., was born in Lander on July 18, 1949, the son of John H. Russell, Sr., and Carol Harriette (Drawbaugh) Russell. He had lived in the Kinnear area all his life. He attended Morton High School and then transferred to Pavillion High School where he served as class treasurer in his junior year. He was graduated with the Pavillion High School Class of 1969. Mr. Russell was an x-ray technician having worked at 12th Street Medical and more recently for Dr. John Harp. His family said Mr. Russell enjoyed his mules and horses, hunting and fishing, yard work, and the outdoors. He was a stained glass craftsman. Through his work and socializing, his family said "he knew everybody." They said he loved to be a helping hand, always had a smile, and was known for his sense of humor. He especially loved his dogs, Charlie, Rascal, and Nugget. Survivors include his companion, Penny Novotny; sons, Matthew Russell and his wife Christina of Kinnear, and Aaron Russell of Kinnear; grandchildren, Alexandra Kini and Mindy Russell; brother, Jim Russell of Riverton; sisters, Patty Day of rural Riverton, and Wanda McNaught of Cheney, Wash.; several nieces and nephews, and an uncle, Dean Drawbaugh. He was preceded in death by his parents. Memorials may be made to the Riverton Animal Adoption Center, in care of the Davis Funeral Home, 2203 West Main Street, Riverton WY 82501. On-line obituaries are available and condolences for the family may be made at: thedavisfuneralhome.com Services are under the direction of the Davis Funeral Home of Riverto